Class of 2022 Valedictorian and Salutatorian

Derek Reardon, Interim Principal of Hudson Senior High School, along with School Counselors Caitlin Dorrer and Rocky Payne, are pleased to announce that Simon Rowe has achieved Valedictorian and Anneliese Ide has achieved Salutatorian for the Class of 2022.

Simon is involved in a myriad of extracurricular activities. He is a member of the National Honor Society, Mock Trial, Model UN, Student Council, Tri-M Music Honor Society, as well as the Pride, Environmental, and Drama clubs. As a testament to his leadership ability; Simon serves as President of the  Pride and Drama clubs, and Vice President of the National Honor Society and Mock Trial. He also is the student representative for the Positive Behavioral  Interventions and Supports (PBIS) Team, as well as serving as Class Treasurer. Simon played an integral role in establishing the Student Council Newspaper, which helped disseminate pertinent information to students in the midst of many students being virtual learners during the COVID pandemic.

Simon was recognized for his outstanding work by being a recipient of the Saint Michael’s Book Award during his junior year and this year has been nominated by Assemblymember Didi Barrett for the 106th District Presidential Scholars Program. He plans on majoring in Biomedical Sciences and attending SUNY Stony Brook in the fall. 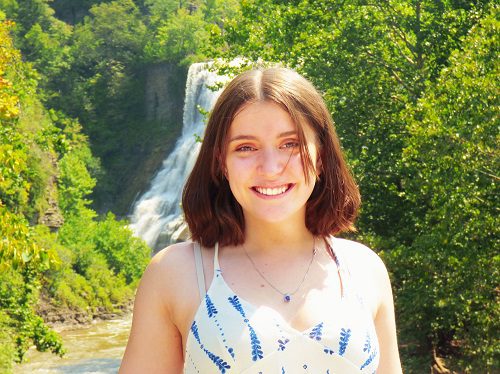 An active member of both the school and greater Hudson community, Anneliese holds the position of Secretary for the National Honor Society. Other positions held include Treasurer for the TRI-M Music Honor Society, Treasurer for the Drama Club, and Treasurer for the Robotics Team. She has participated on our Varsity Swim and Modified Soccer Teams, and competes on the Hudson X-plosions travel softball and Columbia Elite Allstars competitive dance teams.

Anneliese has volunteered for Animalkind and Cat Wranglers of Claverack helping to control feral cat colonies and foster animals in need. Ms. Ide plans to pursue a degree in Biomedical Engineering at the University of Connecticut in the Fall.