After lengthy discussions between district leaders, members of the baseball community and local residents, Hudson City School District is planning repairs to the original baseball field and athletic facility behind Montgomery C. Smith Elementary School, with further upgrades under consideration for the near future.

This announcement represents a change from the original plan outlined in the 2015-2016 school year as part of the overall vision for the HCSD athletic facilities, a change the District acknowledges has not been widely communicated. We are fully committed to serving our students, staff, and the community to the best of our ability. We believe this new plan represents a wonderful and practical opportunity for our athletes and community, and welcome input from all interested parties.

When first envisioned, the District sought to consolidate all competitive sports at one location. A large part of that vision was realized in 2017 with the opening of the Bluehawk Sports Complex at Hudson Jr./Sr. High School. Building the new facility was part of a larger Capital Project, and includes the track, football and soccer fields. Upon completion of the new sports complex, Barrett Field at MCSES was paid homage in a heartfelt public event on September 27, 2017.

Following the successful transition of football, soccer, and track and field to the high school campus, HCSD turned its attention to long-promised improvements for our baseball and softball athletes. These improvements are funded outside of the Capital Project and are to be completed as part of our regular facilities program.

Therefore, the District “hit the pause button” and began to explore the possibility of upgrading the old baseball field to make it the premier field we had envisioned but in its current location. Ultimately, we saw this change in plans as an opportunity to keep Barrett Field in operation as a competitive sports complex, as was intended when it opened in 1935.

Although upgrades are required for the current facility to operate in a safe and competitive fashion, we are positioned to save the District upwards of $150,000 by working with the baseball field we have rather than building an entirely new one. At the same time, we will be able to provide our athletes with the improvements and safety measures they deserve, including new dugouts, replacing the backstop and adding fencing.

The District was recently presented with a design plan that includes these improvements. However, after careful consideration and public comment, we are not satisfied that these plans serve all the needs of the facility. We will continue to review our options to create a multiple use plan that meets the needs of our students and the community. The current priorities are that the dugouts and batting cages be located in a manner which allows the old track to be maintained for elementary school and community use, and that the fence not obstruct such use. We seek to retain the character and historic intent of the facility while bringing it into the 21st century.

Regarding the current scope of work at the site, we will continue with the 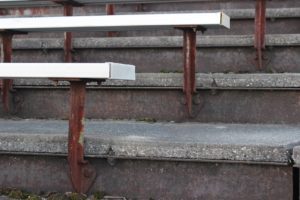 removal of the bleachers behind home plate. This work was included in the most recent Capital Project, as the bleachers were deemed unsafe in a state-mandated Building Condition Survey performed in 2015. Once removal is complete, the area will be cleaned up and landscaped for safety and accommodation of District-owned portable bleachers. A final plan for the bleachers is under consideration as part of the larger upgrades to the facility.

In order to ensure all interested parties have a voice at the table, the District invites people to submit comments by emailing hcsdboard@hudsoncsd.org, and to participate in future Facilities Committee meetings scheduled throughout early fall. Those meetings will be announced on the electronic sign in front of Hudson Jr./Sr. High School and posted on the District website.

HCSD is proud that we have this opportunity to keep Barrett Field in operation, and look forward to creating a superior baseball facility for Bluehawk athletes while also caring for this unique athletic facility.