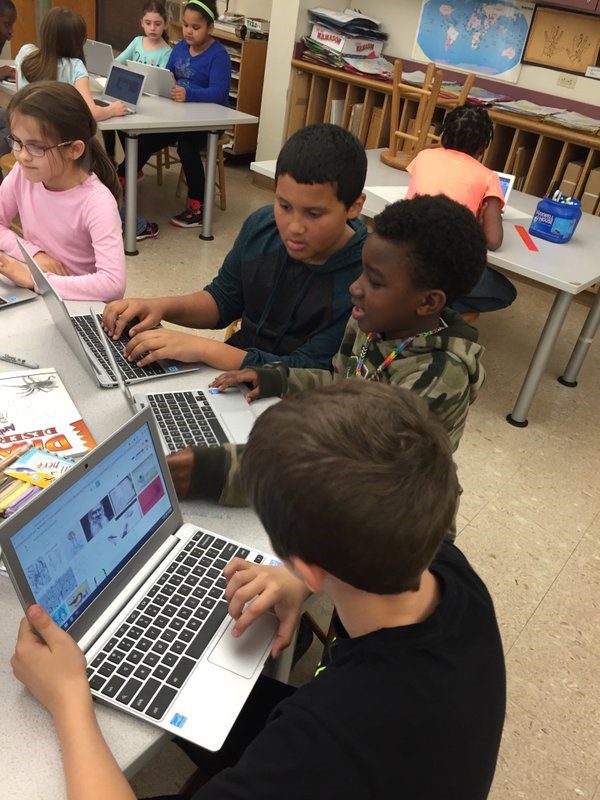 Chromebooks, which are laptop devices made by Google, give students the opportunity to enhance and personalize their learning experiences with the guidance of their teachers.

As part of the District’s goal of integrating technology into the curriculum and cultivating 21st century skills, the 1:1 Chromebook initiative provides all students in Grades 2-5 with Chromebook laptops to use during the school day. The term “1:1” means each student has their very own Chromebook for individual use while they are at school. In addition to enhancing educational opportunities for students and teachers alike, the 1:1 Chromebook initiative allows us to use less paper and be more “green” than ever before.

The District has been using Chromebooks in classrooms for the past few years and recently began expanding the 1:1 initiative at M.C. Smith Elementary School (as part of the 2016-17 school budget that was passed by voters in May 2016). In 2017-18, MCSES expanded the 1:1 initiative school-wide by introducing touchscreen Chromebooks to the second grade.

Click here to view District policies related to the use of school Chromebooks and internet.

So you’re probably asking, What is a Chromebook?

The main difference between Chromebooks and other laptops, however, is that they run Google’s Chrome web browser only. With other computers, you run various applications and programs from a desktop—including web browsers like Chrome, Safari, Firefox or Explorer. With a Chromebook, the computer is a web browser, and that is where you run your apps like Google Docs, Google Dictionary and Google Classroom. Unlike traditional laptops, Chromebook applications and files are stored online in the “cloud” (using Google Drive) rather than on the Chromebook itself.

One notable advantage of Chromebooks is the speed at which they operate. When students open their Chromebooks to begin working, it takes about seven seconds for the Chromebook to be ready!

With even greater access to school Chromebooks, students in grades 2-5 will continue to: