Tickets are $15 for adults and $8 for students/senior citizens (or free with the HCSD Courtesy Card for Senior Citizens—call the District Office at 518-828-4360, ext. 2101, for information). Tickets are on sale now and can be purchased from cast members or in the Jr./Sr. High School main offices during school hours. Tickets will also be available at the door before each show time. 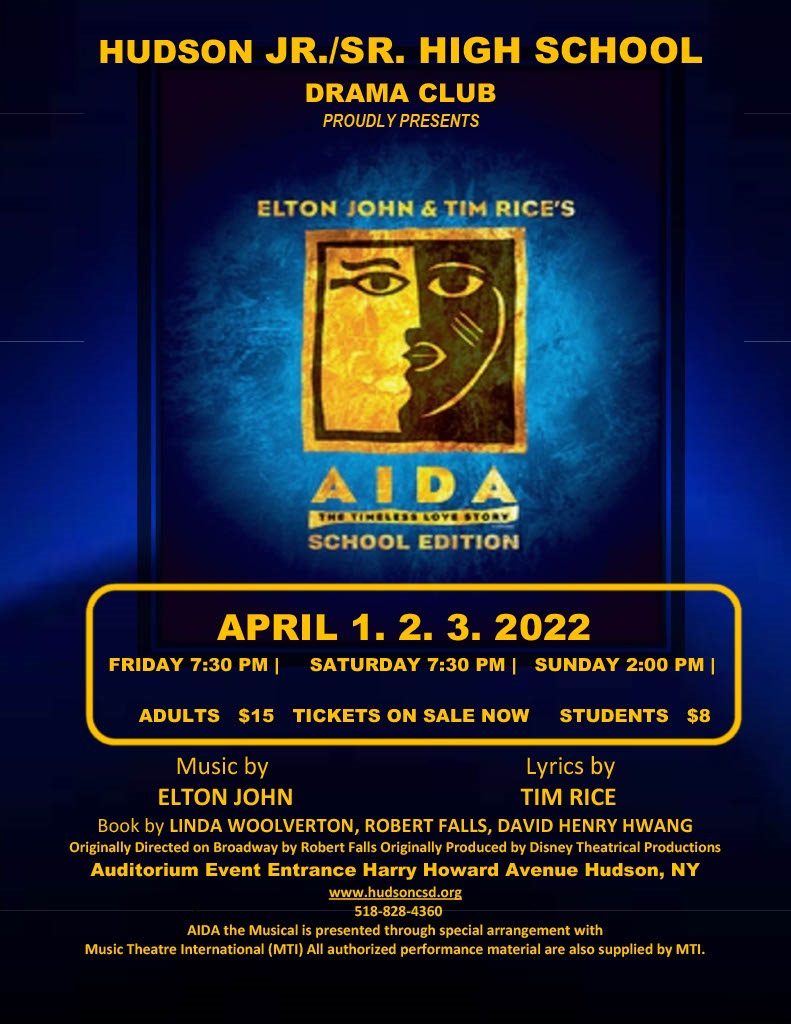 “Aida: School Edition” is a musical about the timeless love story between Radames, an Egyptian captain who is to marry the daughter of the Pharaoh, and Aida, a Nubian princess enslaved by the captain’s army to work at the palace.

Their tale is of forbidden love, pride and torment between the heart’s desire and a leader’s responsibility toward their people. Everything and everyone, including Radames’s father Zoser, the princess Amneris, and the Pharaoh himself, is set against their happiness.

The show is based on the Italian opera by Giuseppe Verdi written in 1871; the musical was written in 1998 by Linda Woolverton, Robert Falls and David Henry Hwang, with music by Elton John and lyrics by Tim Rice. John and Rice previously composed many hit movies and musicals, most notably “The Lion King.” The original production of “Aida” was nominated for five Tony awards.

The cast includes Kyla Woods (Class of ‘22) as Aida, the Nubian princess; Simon Rowe (‘22) as Radames, the Egyptian Captain; and Lexi Beaumont (‘24) as Amneris, the Pharaoh’s daughter; with Kiersten Berry (‘23) as Mereb, Kenold Dorce (‘24) as Radames’s father Zoser, and Hannah Wisdom (‘25) as Nehebka, alongside an ensemble of strong young performers that includes junior high school students as well. This performance is the last high school play for some members of the cast including Woods and Rowe.

“We have so much talent in this district, but these kids haven’t had the chance to put up a show in two full years,” Stein said when asked about the most challenging thing about bringing the show to life.

“We chose a difficult, passionate musical, and the actors have risen to the challenge with real care and dedication. The music by Elton John and Tim Rice is simply beautiful, with lush, heartfelt ballads sung by some incredibly talented students,” said Stein. “The students are having a great time working to get the show ready for the Hudson community and cannot wait to share the magic of this thrilling love story.”