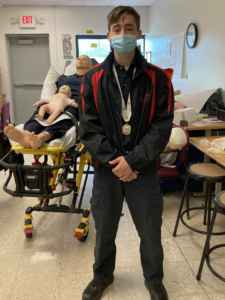 SkillsUSA Championships are annual career competition events that showcase the best Career and Technical Education (CTE) students in the nation. Competitions begin locally and continue through the state and national levels. In a typical year, about 50-60 students compete at the state level in a given event, and about 50 students across the country compete at the national level in a given event. Competitions were performed virtually this year.

For the national competition, Haigh completed two written tests; one test was on SkillsUSA and how the organization works, and the other test was on CPR and first aid skills. Students are given a list of 10 possible scenarios they will be asked to demonstrate skills for in the performance portion of the competition. Judges asked Haigh to perform bleeding control for a major bleed and apply a tourniquet on a patient, perform CPR, and identify the cause for a patient not being fully alert at an accident scene.

CGEC SkillsUSA Adviser Rose Helinski noted the difficulty of the competition, competing against the top students in other states.

“This competition is so intense,” said Helinski. “Jaxon always had two cameras on him, and the judges were constantly asking questions during the performance portion.”

“It was so nerve-wracking to watch as his instructor, but Jaxon did a phenomenal job,” said Fox.

Fox applauded Haigh for his commitment to the competition and his academics. Haigh often stayed after school hours to perfect his practical skills; worked with classmates to drill for the written tests; was exceedingly involved with SkillsUSA at school and more.

“This is something you had to work for,” said Fox. “If you wanted the title, you had to be dedicated … Jaxon is a self-starter and is so self-motivated. You just have to point him in the right direction, and he’s ready to go.”

Haigh received an accommodation from the New York State Department of Health Bureau of EMS, and Fox has nominated him for an AHA CPR award. Fox says Greenport Rescue is interested in hiring Haigh upon his EMT certification completion.