The District is preparing to move forward with renovations to rehabilitate and modernize the John A. Barrett baseball field located on the grounds of the Montgomery C. Smith Elementary School (MCSES). This announcement is a follow up to the statement issued on August 6, 2019.

The decision to proceed was made at a public Facilities Committee meeting on September 11, 2019. In all our decision making processes, we strive to put our students first while also doing right by taxpayers. This action follows more than a year of conversations and a recent two month pause in site work, during which District leaders met with and listened to community members who favor the project as well as those who oppose the rehabilitation due to the size of the field and its historic status.

We are pleased that the NYS Parks, Recreation and Historic Preservation Office (SHPO) has elected to designate the historic school and its grounds as eligible for inclusion in the New York State and National Registers of Historic Places. It is great news and requires respect for the historic nature of the facility, which we strived to maintain in the current design plan. 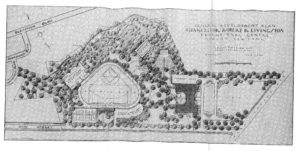 When the school landscape was designed by noted landscape architect Dr. Laurie Davidson Cox in 1932, it was named the Robert R. Livingston Educational Center after the founding father who helped make its construction a reality. The original design (right) included athletic fields and structures such as the running track, baseball diamond, football field, tennis courts and grandstand bleachers. (As noted in this designation letter received from SHPO, not all components of Dr. Cox’s design were completed, such as the stage or pool.) This landscape has remained relatively unchanged since then.

Sadly, the historic athletic facility was not functional for some modern competitive sports and did not meet certain standards for modern high school athletic competitions. Additionally, safety concerns arose when a 2015 state-mandated Building Condition Survey deemed the bleachers to be unsafe and it was recommended the bleachers be removed. Therefore, the District proposed an overhaul of these facilities to address health and safety issues and the needs of our school community.

Thanks to the enthusiastic support of our local community and taxpayers, we embarked on a capital project that would restructure our schools and build a new athletic facility at Hudson High School that would better meet the needs of a modern athletics program.

Although the project scope initially envisioned (and accomplished) the consolidation of most sports onto one campus with a modern track and field facility, we began to explore the possibility of rehabilitating the old baseball field at MCSES rather than building a brand new one at the high school after receiving feedback from members of the baseball community (past/present athletes, families and coaches). Not only did this change in plans present a cost savings of nearly $160,000, but the District recognized an opportunity to keep the historic field in operation as a competitive sports complex, as was intended when it first opened in 1935.

After much consideration and consultation, we believe we are well positioned to breathe new life into the facility designed by Dr. Cox and supported by Robert Livingston. The District was pleased to receive the support of SHPO, which reviewed the proposed design and determined that the District’s plan to rehabilitate the field “will not adversely impact the [historic] eligibility of the M.C. Smith School property” as the property should be for student use. Read the full SHPO letter here.

Based on input received over the past months, the current design plan is multifaceted and aims to accomplish several goals: create a premier ball field for our Junior Varsity and Varsity student athletes, maintain and preserve the surrounding track and fields for school and community use, and keep Barrett Field as a staple of the Hudson community.

The following design allows us to modernize the baseball aspect of the original Livingston complex while remaining committed to the landscape as initially designed by Dr. Cox in 1932. 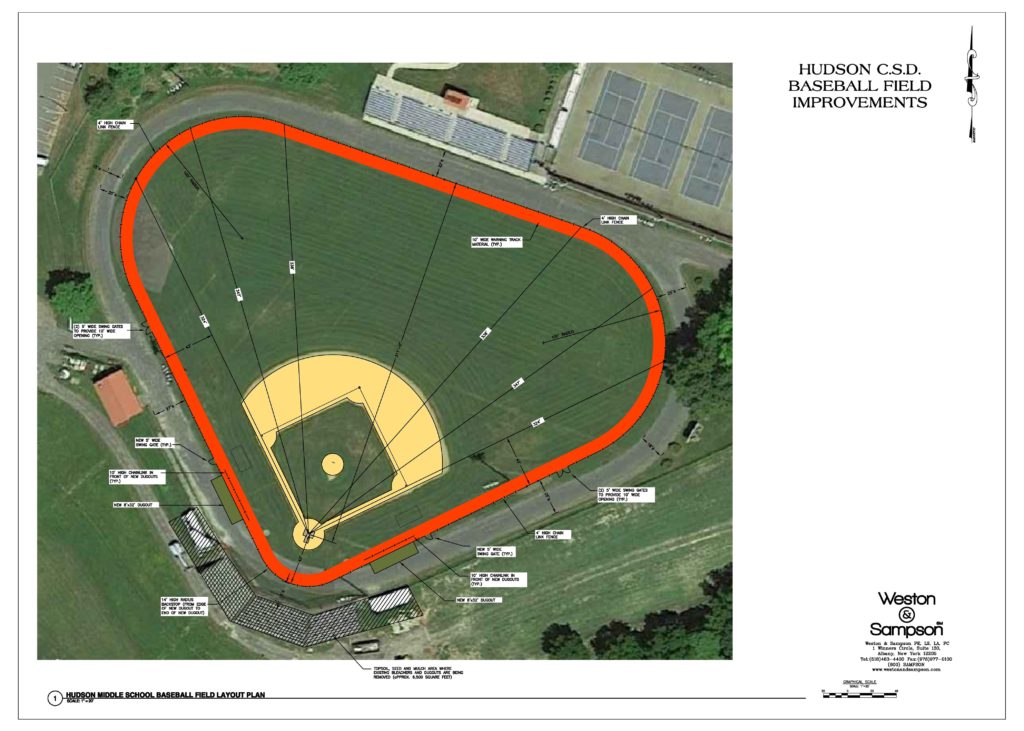 To maximize available space without overtaking the track that is integral to Dr. Cox’s original design, we are working closely with Rhinebeck Architecture’s team of architects and engineering consultants to ensure the distance from home plate to centerfield fence is 320 feet. Please note that although the draft rendering indicates a distance of 311 feet, there is a discrepancy between this figure and a second measurement that determined the distance to be closer to 320 feet. In seeking external guidance, representatives from Section 2 and the NYS Public High School Athletic Association (NYSPHSAA) informed the District that either distance is acceptable for conference play. Either distance is acceptable for sectional play as long as the following criteria are met: 1) regular season games are played at the field, 2) there are no safety concerns, and 3) participating schools are notified of the field dimensions and agree to play on the field. Furthermore, the rules outlined by the National Federation of State High School Associations (NFHS) provide a recommended distance to centerfield however there is no minimum or mandate. Still, we continue to work with architects to improve the dimensions and maximize distance while also preserving the track. Despite recent questions regarding the size and efficacy of the planned field, the District is confident the rehabilitated ball field will be sufficient for regulation play based on the guidance of state and local athletic officials.

Other items included in the rehabilitation project are a four-foot perimeter fence that increases to six feet in the outfield (as recommended for player safety), a new backstop and new dugouts. There will be six new dugouts in total, two at Barrett Field and two at each of the softball fields on the high school campus. The Modified and JV/Varsity softball fields will also receive other upgrades, including grading for a spectator area, a backstop and fencing. The completion of these projects is determined to be necessary to safeguard the health and safety of students and to maintain and preserve school district property.

The costs of the Barrett Field rehabilitation project and the softball field upgrades are estimated to not exceed $300,000. These are considered to be ordinary and contingent expenses for supporting existing facilities and will not impact taxes or the general budget.

Renovations to the current ball field at MCSES are set to begin immediately so that it will be completed for the Spring 2020 season. Work initially began this past summer, however, as mentioned above, it was put on hold while District leaders continued conversations with community members about the planned rehabilitation.

Removal of the old dugouts and deteriorating bleachers is underway, so community members may notice temporary fencing in place for safety reasons. Concrete pads are due to be poured in mid to late October in preparation of new dugout installation in late November or early December. Renovations to all fields are expected to be completed in time for the playing season. The only item that may not be complete for baseball season is the warning track, which will depend on the completion of all other project items and weather conditions. Another update will be issued as work progresses over the next several months.

The District is excited to return Barrett Field to a state of utility while working to preserve the features of the property that are significant to its historic, architectural and cultural values. We take a great deal of pride to be the home of a ball field whose property has been recognized for its historic importance. We believe this plan is an appropriate compromise that will continue to benefit the Hudson community and, more importantly, our students for many years to come.