The Hudson Junior/Senior High School Drama Club presents “Fame: The Musical” this spring. It is a stage adaptation of the 1980 movie about students of the famous New York High School of the Performing Arts.

Tickets are $10 for adults and $5 for students/senior citizens (or free with the HCSD Courtesy Card for Senior Citizens). Tickets are on sale now and can be purchased from cast members or in the Jr./Sr. High School main offices during school hours. Tickets will also be available at the door before each show time.

“Fame” follows the final class of the New York High School of the Performing Arts, from audition and admission in 1980 to graduation four years later. All the struggles, fears and triumphs are depicted with razor-sharp focus as the hopeful young artists navigate the worlds of music, drama and dance. This high-octane musical features the Academy Award-winning title song “Fame” and a host of other catchy pop numbers.

The cast of 25 includes several talented actors, led by Kee’sha Woods, a senior at Hudson High School, in the starring role. At the helm are Betsy and Lucy Rees, who are now in their second season as the directors of the venerable Hudson Jr/Sr. Drama Club.

“This production is so full of heart and reckless abandon that I feel sorry for anyone who misses it,” enthused Rees. “The kids pour their hearts and souls into each and every moment.”

The directors chose “Fame: The Musical” because it showcases the talents of the entire ensemble cast rather than focusing only on one or a few main characters.

So what can audiences expect?

“Audiences will be on their feet at the end of the show having followed a massive journey,” Woods promises. “They will really feel the heart of this show, and obviously they will be singing the iconic number, ‘Fame!’” 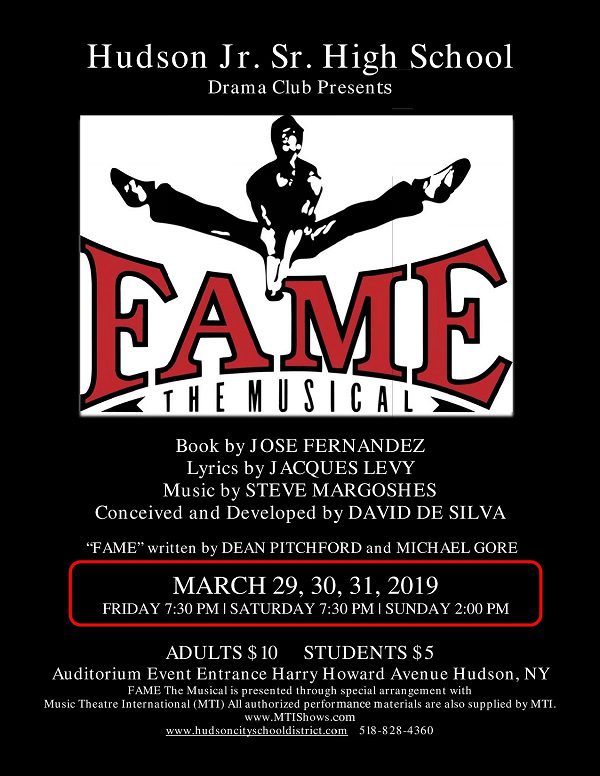