Brianna Tsitsera, a sophomore at Hudson High School, was recently selected to join the Cornell Cooperative Extension’s new 4-H Invasive Species Action Team (ISAT). Tsitsera is one of 16 teenagers from across New York State, and the only one from Columbia County, to be chosen for the team.

The brand new program, made possible by a grant from the U.S. Department of Agriculture’s Animal and Plant Health Inspection Service, aims to educate youth about the impact of invasive plant species on “both the ecology and economy of New York State,” according to the website.

During mid-winter break, Tsitsera and other ISAT ambassadors participated in educational training at the Amboy 4-H Environmental Center in Williamstown, New York, just north of Syracuse. The teens learned about various local invasive plant species of concern, as well as hands-on educational activities they can use to inform others about these species and the effects they have on local ecologies.

“We learned about different types of species such as native, non-native and invasive,” said Tsitsera. “Invasive species are troubling because they have fast reproduction rates and they can overtake the habitats of native species.”

HHS sophomore Brianna Tsitsera speaks with children at a county fair, teaching them about invasive species.

Learning about invasive species was only part of the training. Members of ISAT also focused on leadership, communication and public speaking skills to help them effectively share the information. They will apply what they have learned to educate others using informational posters and interactive displays at places such as schools, local events and county fairs.

“During the training we worked on public speaking, making sure we were able to give out facts correctly,” said Tsitsera. “We practiced ‘elevator speeches’ that are short and simple but still able to give accurate information. They also gave us the tools needed to communicate with different age groups. Children sometimes don’t understand some of the big words.”

Tsitsera received an invasive species card game that she said kids are likely to enjoy. The game illustrates how these species can affect populations of other species and can push out native species, which can harm the ecosystem. 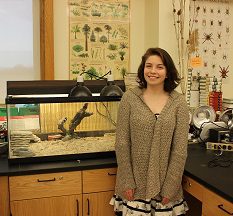 Brianna Tsitsera, a member of the HHS Environmental Club, snaps a photo with Charlie, the pet bearded dragon in Mr. McDarby’s classroom. Tsitsera hopes to major in Environmental Science and Music.

The ISAT ambassadors will also share information about the ways in which other youth can become involved in the monitoring and eradication of local invasive species.

“It’s important to look at the environment around us, consider environmental problems, educate others about the issues and what we can do about them,” said Tsitsera. “Maybe I’ll talk to the Mayor.”

As a member of HHS’ Environmental Club and participant in the annual Envirothon competition, Tsitsera was encouraged to apply for the program by HHS science teacher and club adviser, Jim McDarby.

“I’m not sure how many applicants there were, but she had to go through a pretty intensive application process,” said Mr. McDarby.

“We are all extremely proud of Brianna,” he continued. “She works very hard and is an asset to both the Environmental Club and the Envirothon Team. They couldn’t have picked a better student to be an ISAT ambassador.”

“The speaking aspect will come in handy for the Envirothon competition,” said Tsitsera, who will be the anchor for her team this year.

The Hudson Valley Envirothon is a regional and statewide high school science competition in which teams of students are tasked with answering questions about New York State aquatics, wildlife, forestry, soils and a current issue that changes each year. Teams are also asked to give an oral presentation about their solution to an environmental problem, which is based upon the competition’s current issue.

Coincidentally, the theme of this year’s Envirothon competition is invasive species.

Hudson High School will be sending two teams of five students each to this year’s regional Envirothon competition. If the teams finish as the top teams in Columbia County, they will go on to the New York State Envirothon in May.

“Our school has been the top school in Columbia County in four of the past six competitions,” said Mr. McDarby. “We even won a Regional Title as the top scoring school at the Hudson Valley Regional Envirothon in 2010.”